Gastrointestinal stromal tumors (GIST) comprise <3% of all gastrointestinal (GI) tumors with an estimated incidence of 0.4–2 cases per 100,000 per year (1,2). They represent the most common mesenchymal tumor of the GI tract and were first described by Mazur and Clark in 1983 (3,4). Stomach and small intestine represent the most common locations with small intestine GISTs found in up to 20% of cases (5,6). Jejunal and ileal GISTs occur in older adults, with a median age of 59 years (7). In a minority of cases, these tumors are associated to genetic syndromes such as neurofibromatosis type 1 (NF1) or Carney-Stratakis syndrome (8,9).

GIST is typically asymptomatic and often diagnosed incidentally through endoscopic or imaging studies (10-12). These tumors can also manifest with nonspecific GI symptoms and a slow GI bleeding in up to one-third of the cases (4,7). However, acute massive GI bleeding related to small intestine GIST is unusual (13-18). Compared to other GI tumors, GISTs are relatively fragile and more vascularized. The joint action of GI peristalsis and fecal transmission as well as tumor growth leading to mucosal and submucosal destruction, vascular invasion, and tumor necrosis, may result in intraluminal hemorrhage (19).

Surgical resection is a reasonable approach in treating patients with localized, nonmetastatic disease. However, radiologic embolization represents an effective option in the management of GISTs with massive acute bleeding. Embolization effectively controls the GI bleeding and decreases the tumor burden, which subsequently facilitates minimal invasive surgery (21,22).

We present a case report emphasizing the importance of the clinical suspicion of GIST as a cause of small bowel bleeding (SB) particularly in patients who are prone to develop these tumors (i.e., phakomatosis). Our article also highlights the important role of angiography and embolization in unstable patients with acute overt hemorrhage related to GIST. We present the following case in accordance with the CARE reporting checklist (available at https://gist.amegroups.com/article/view/10.21037/gist-21-13/rc).

A 48-year-old man presented to the emergency department with a 5-day history of nausea, melena, and fatigue (Figure 1). He had prior medical history significant for NF1, essential hypertension and osteoarthritis. Patient was taking amlodipine and diclofenac chronically. On examination, the patient had normal vital signs with no abdominal tenderness. Laboratory data revealed anemia with a hemoglobin level of 8.4 g/d (baseline 13.3 g/dL). Upper endoscopy and colonoscopy were performed with no source of bleeding identified. Throughout his initial hospitalization, the patient remained hemodynamically stable. VCE was offered to determine source of SB, however patient refused to undergo additional inpatient procedures. He left against medical advice after 2 days of observation with the intention of obtaining a VCE and additional imaging studies in the outpatient setting to guide further treatment. 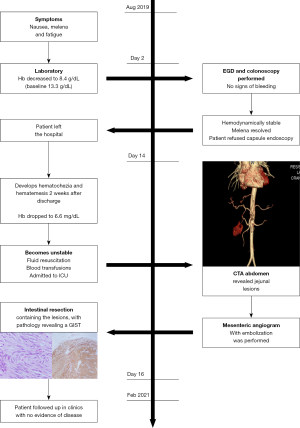 Patient subsequently returned to the hospital 2 weeks later with hematochezia and hematemesis. This time the patient was hemodynamically unstable, and hemoglobin had dropped to 6.6 g/dL. Platelet count was 158,000/µL and international normalized ratio (INR) 1.16. He was admitted to the intensive care unit (ICU) for further management. He received fluid resuscitation, multiple transfusions of packed red blood cells (RBC), and vasopressor support. After medical stabilization he then underwent computed tomography angiography (CTA) of the abdomen and pelvis. The study revealed an enhancing multilobulated lesion within the proximal jejunum (Figure 2), as well as a second enhancing mural lesion within an adjacent jejunal loop (Figure 3), which were believed to be the source of the GI bleeding. He was then taken to interventional radiology for mesenteric angiogram with embolization of the hemorrhagic jejunal tumors (supplied by a proximal jejunal branch arising from the superior mesenteric artery). GI bleeding successfully ceased after the intervention. An exploratory laparotomy was undertaken 2 days later with small bowel resection containing the lesion. Jejunal intussusception was also confirmed during the procedure. The patient recovered with no postoperative complications and was discharged on the ninth postoperative day. Patient has remained asymptomatic without evidence of new episodes of GI bleeding or tumor recurrence at a six-month follow-up period. 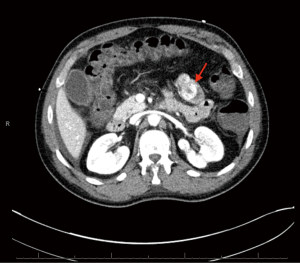 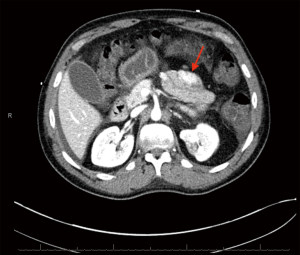 Two tumors located in the jejunum were identified. The tumors measured 3.1 and 1.2 cm in their greatest dimensions. Histological examination revealed well-defined tumors arising from and limited to the muscularis propria (Figure 4). They were composed by uniform spindle cells with eosinophilic cytoplasm and absent nuclear atypia (Figure 5). Discrete “skeinoid fibers” were identified (Figure 6); this finding is present in 30–50% of small bowel GISTs and its absence is associated with adverse outcomes (23,24). Immunohistochemical staining showed strong and diffuse labeling for CD117 (Figure 7) and negativity for S100. 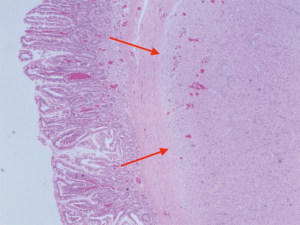 Figure 4 H&E stain, ×10 original magnification. The tumor is well-circumscribed and limited to the small intestine muscularis propria (red arrows). The overlying mucosa is congested but ulceration is not represented in this section. H&E, hematoxylin-eosin. 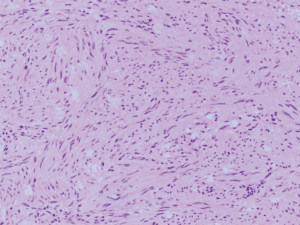 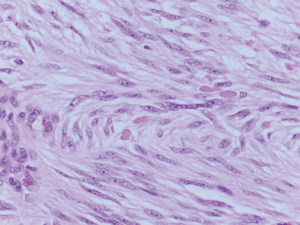 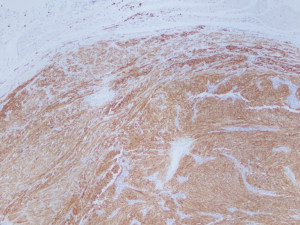 A single mitosis was observed in 5 mm2 of tissue in the larger tumor while the smaller tumor had no visible mitoses. No tumor necrosis or lymphovascular invasion were reported in either case. The surgical resection margins and lymph nodes (0/1) were uninvolved by the tumor. These findings were consistent with a multifocal, low-grade (mitotic rate <5/5 mm2), spindle cell-type GIST. The tumor was classified as stage I (mpT2, N0, M0) according to the American Joint Committee on Cancer (AJCC) Staging Manual, 8th Edition.

All procedures performed in this study were in accordance with the ethical standards of the institutional and/or national research committee(s) and with the Helsinki Declaration (as revised in 2013). Written informed consent was obtained from the patient for publication of this case report and accompanying images. A copy of the written consent is available for review by the editorial office of this journal.

SB remains a relatively uncommon event, accounting for only 5–10% of all patients presenting with GI bleeding (25,26). While GISTs may cause a slow GI bleeding in up to one-third of the cases, acute massive GI bleeding related to small intestine GIST is unusual (4,7,13-18). GI bleeding secondary to small intestine GISTs can be challenging as these tumors are inaccessible by conventional endoscopic procedures. Additional diagnostic tools that are available to diagnose SB include VCE, deep enteroscopy, conventional angiography and magnetic resonance enterography (MRE). The American College of Gastroenterology recommends VCE as a first-line procedure for SB investigation after negative upper and lower endoscopies (27). Push enteroscopy can also be performed as a second-look examination in the evaluation of suspected SB, especially if a proximal lesion is considered (VCE is associated with lower detection rate of lesions in the duodenum and proximal jejunum). Due to this patient’s preference for outpatient workup, such investigations did not take place immediately. It is conceivable that if the appropriate small bowel evaluation had been done earlier while the patient was hemodynamically stable, GIST would have been diagnosed earlier and adequate treatment would have prevented the significant GI re-bleeding experienced by the patient. Hence, this case illustrates the importance of a systematic diagnostic approach to SB, especially in patients with a high probability of harboring small intestine tumors (i.e., GIST in patients with RASopathies, Carney-Stratakis syndrome, and primary familial GIST syndrome).

Contrast-enhanced computed tomography (CT) scan of the abdomen and pelvis is the imaging method of choice to characterize an abdominal mass suspicious for GIST. GIST shows the characteristic of a well-defined homogenous and solid mass that enhances with intravenous contrast on CT studies. CT imaging can also assess the extent of the primary mass, allowing for staging, and monitoring of treatment response. If the patient has active overt bleeding and is hemodynamically stable or if the source of GI bleeding remains unclear, multiphasic CT or CTA should be performed to identify the source of bleeding and guide further management. CTA represents a reliable method to diagnose a bleeding jejunal GIST (13-15); it has shown to be able to detect bleeding rates as slow as 0.3 mL/min compared to 0.5–1 mL/min for conventional angiography and 0.2 mL/min for technetium 99m-labeled RBC scintigraphy (27). On the other hand, conventional angiography has the advantage of therapeutic intervention with transarterial embolization at the time of diagnosis. Therefore, in unstable patients with acute overt hemorrhage conventional angiography should be performed emergently (27). Embolization is effective in both, controlling the GI bleeding and will decrease the tumor burden, which subsequently facilitates resection via minimal invasive surgery (21,22).

Mutations in KIT (CD117) or platelet-derived growth factor receptor alpha (PDGFRA) gene are the primary drivers of GIST oncogenesis. These gain-in-function mutations lead to the constitutive activation of kinases resulting in cellular growth (via the PI3K/AKT/mTOR, Ras/Raf/MAPK and JAK/STAT3 signaling pathways). Individuals with NF1 are more likely to develop GIST due to loss of neurofibromin (encoded by the NF1 gene) which represents a negative regulator of the Ras/Raf/MAPK pathway through inhibition of the RAS oncogene. NF1-related GISTs strongly express KIT but are usually wild-type for both KIT and PDGFRA (28). It is estimated that 7% of patients with NF1 will develop one or more GISTs in their lifetime, with most of them arising from the small intestine (3). Therefore, clinicians should consider this potential entity in individuals with NF1 when dealing with an obscure source of GI hemorrhage and/or intussusception.

Treatment of GIST requires assessment of the extent and progression of disease, as well as appropriate risk stratification. Over 70% of patients with primary GIST are cured by surgery alone, hence it has remained the mainstay of management for patients with localized disease (29). Metastasis to lymph nodes is rare and lymphadenectomy is seldomly performed (6). Recurrence is very common and adjuvant therapy with tyrosine kinase inhibitors (TKIs) is recommended following the resection of high-risk primary tumors (29). Imatinib mesylate has been associated with an improved 1-year recurrence-free survival rate (30), however NF1-related GISTs do not respond to TKIs (29). Fortunately, this patient is at low risk for developing progressive disease based on prognostic features (tumor size, location and histologic features) and has not warranted adjuvant therapy (7). Until this date, he has remained asymptomatic with no evidence of recurrent disease during routine follow up.

This case report emphasizes the importance of massive GI bleeding secondary to small intestine GIST and brings to the attention of the medical community the difficulties associated with its diagnosis. Diagnostic modalities such as deep enteroscopy, VCE, CTA, and conventional angiography play an important role in the diagnosis of bleeding small intestine GISTs. Clinicians should consider early multidisciplinary approach when dealing with a small intestine source of GI bleeding and/or intussusception in the setting of phakomatosis.

Reporting Checklist: The authors have completed the CARE reporting checklist. Available at https://gist.amegroups.com/article/view/10.21037/gist-21-13/rc

Conflicts of Interest: All authors have completed the ICMJE uniform disclosure form (available at https://gist.amegroups.com/article/view/10.21037/gist-21-13/coif). The authors have no conflicts of interest to declare.

Ethical Statement: The authors are accountable for all aspects of the work in ensuring that questions related to the accuracy or integrity of any part of the work are appropriately investigated and resolved. All procedures performed in this study were in accordance with the ethical standards of the institutional and/or national research committee(s) and with the Helsinki Declaration (as revised in 2013). Written informed consent was obtained from the patient for publication of this case report and accompanying images. A copy of the written consent is available for review by the editorial office of this journal.