Dose escalation of ripretinib can lead to response in advanced gastrointestinal stromal tumor patients refractory to the standard dose: a report of two cases

Gastrointestinal stromal tumor (GIST) is the most common type of soft tissue sarcoma of the gastrointestinal (GI) tract, affecting 1.1 every 100,000 persons per year worldwide (1). Oncogenic driver mutations in the tyrosine kinase receptor c-kit gene are responsible for up to 80% of all GIST (1,2), while mutations in platelet-derived growth factor receptor α (PDGFRA) gene are responsible for 5–10% (1,3). Those two mutations are mutually exclusive (1,3). The remaining 5–10%, so-called wild type, harbor a heterogeneous mix of mutations, including NF1, BRAF, SDH, and RAS (1).

The introduction of imatinib, a tyrosine kinase inhibitor (TKI) that inhibits KIT, dramatically changed GIST prognosis, leading to tumor control in 80% of cases (4). Despite imatinib, up to 90% of patients with metastatic GIST will ultimately be refractory to it, requiring further therapies (4). Although, 10% of patients can still benefit from Imatinib after 10 years of treatment (5). Regorafenib, a second-generation TKI, and sunitinib, a multi tyrosine kinase inhibitor, are currently used in refractory disease (6,7). Nevertheless, the majority of patients will also eventually be refractory to these therapies (6). Understanding the need for new lines of treatments, ripretinib was approved in 2020 to be used in patients with advanced GIST refractory to three or more kinase inhibitors, including imatinib (4).

INVICTUS was the phase III trial that led to ripretinib approval. Patients with advanced GIST who had received at least 3 prior kinase inhibitors were randomly assigned to receive ripretinib at a dose of 150 mg daily or placebo (4). In the ripretinib group, 51% of patients were progression-free at 6 months (median progression-free survival of 6.3 months), whereas only 3.2% in the placebo group(4). Nevertheless, for ripretinib refractory patients, few options remain. The off-label use of a higher dose of ripretinib could be a valuable strategy in this scenario. Here we report two patients successfully treated with ripretinib dose escalation. We present the following cases in accordance with the CARE reporting checklist (available at http://dx.doi.org/10.21037/gist-21-1).

All procedures performed in studies involving human participants were in accordance with the ethical standards of the institutional and/or national research committee(s) and with the Helsinki Declaration (as revised in 2013). Written informed consent was obtained from the patients.

A 25-year-old man presented to a hospital with abdominal discomfort and pain. An abdominal computer tomography (CT) scan revealed a 12 cm bowel mass. The medical team performed an exploratory laparotomy with small bowel resection, and pathology showed a kit exon 9 mutated GIST. Due to the high-risk features of his disease, he was recommended adjuvant imatinib. However, the patient did not tolerate the medication and discontinued it. Follow up CT scan a year later showed multiple liver lesions, with biopsy confirming metastatic spread.

Due to exon 9 mutation, he was then started on imatinib 800 mg, which he took for a year until an abdominal CT scan showed increased liver lesions. He was then started on sunitinib, which he received for 6 months until disease progression. Regorafenib at 120 mg dose was started. On regorafenib, he developed a grade 2 hand-feet syndrome that improved over time. Regorafenib was also given for 6 months until he developed disease progression (Figure 1).

He was placed on ripretinib 150 mg daily, but two months later, he had disease progression in the liver and abdomen (Figure 2). Due to progression, dose escalation was proposed, and the patient tolerated well the dosage of 150 mg twice per day, associated only with mild fatigue. His follow up CT scan three months after showed a 15% regression in his liver and abdominal lesions (Figure 3). He remained progression free for 4 months.

Figure 2 On subsequent CT three months after there has been marked interval progression in both the liver masses (arrow) and the peritoneal implants (dashed arrows). There is increased mass effect on the urinary bladder (*).

Figure 3 Follow-up CT three months after demonstrates decreased enhancement in the dominant right hepatic tumor (arrow) and reduction in the size of the adjacent smaller mass in the caudate lobe; additionally, decrease in size of the right lower quadrant implant (dashed arrows) indicate response to therapy.

A 54-year-old male presented to the hospital with acute abdominal pain. At that time, he was found to have a 20 cm unresectable gastric KIT positive GIST. He was started on imatinib 400 mg daily, obtaining an 80% regression in a year, allowing the lesion to be resected with negative margins. Due to high-risk features, imatinib was maintained.

A new left adrenal gland lesion was seen two years later, and biopsy confirmed it to be a recurrent GIST (Figure 4). He was placed on avapritinib 300 mg daily through a clinical trial with no response and then regorafenib 150 mg daily also with no response. Nevertheless, he underwent resection with negative margins and was given postoperative imatinib 800 mg. 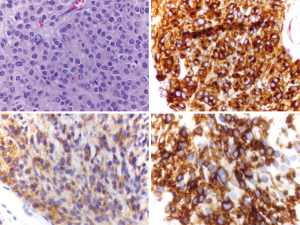 One year later, he had a suprarenal recurrence and development of new masses: one in the upper midline abdomen and one in the retroperitoneum (Figure 5). At that point, patient was started on ripretinib 150 mg, but tumor progression continued three months after, with an increase in all the mentioned lesions (Figure 6).

Figure 5 Axial contrast-enhanced CT shows solid peritoneal implants in the anterior upper abdomen (arrow), and anterior to the left kidney (dashed arrow) at the level of the superior mesenteric artery.

Figure 6 Follow-up CT from three months after demonstrates approximately 35% interval growth in maximum tumor diameter (from 34 to 46 mm) in the anterior upper abdominal mass (arrow) that measured 75 HU, and 116% interval growth in maximum diameter (30 to 65 mm) in the pararenal mass (dashed arrow) that measured 60 HU. Also, there is a new mass (*) posterior to the superior pole of the left kidney.

Ripretinib was then escalated to 150 mg twice daily. The patient developed alopecia but otherwise tolerated the higher dose well, with no evidence of new laboratory abnormalities. Three months after dose escalation, a follow-up scan showed an interval decrease in density and size of the upper abdominal and the suprarenal mass, demonstrating response by choi criteria (Figure 7). He remained progression free for 5 months.

Before the era of tyrosine kinase inhibitors, the management of GIST relied mainly on surgical resection, as GISTs are known to be chemo-resistant (8). The discovery of TKIs was a breakthrough in GIST treatment (8). In 2001, the FDA approved imatinib mesylate for the treatment of metastatic or unresectable GIST. Since then, imatinib is recommended as the first-line treatment for advanced GIST patients, and for adjuvant therapy for high-risk GIST patients by the European Society of Medical Oncology (ESMO), National Comprehensive Cancer Network (NCCN) Task Force, and the Japanese Society of Clinical Oncology (JSCO) (9-11).

Genetic studies have shed light on the biology of GISTs. Now, it is evident that GIST is a genetically heterogenous group of tumors, with distinct clinical characteristics and therapy response. Molecular analysis is essential before initiating treatment, as this will provides the basis not only for surveillance, genetic screening of familial syndromes, but most importantly guide systemic treatment (12). For example, NF1 mutated, BRAF mutated and SDH deficient GIST are resistant to imatinib (12). In such subgroup of patients, some treatment strategies include MEK inhibitor trials (NF1 mutated GISTs), BRAF-inhibitors (BRAF mutated GISTs), glutaminase inhibitor trial (SDH deficient GISTs), and guadecitabine trial (SDH deficient GISTs) (12).

Despite initial disease control, advanced GIST patients will develop resistance to imatinib, due to secondary kinase mutations (4,5). Thus, there is a need for drugs that inhibit a broad spectrum of KIT and PDGFRA mutants, inhibiting the resistance mutations and limiting the impact of new mutations (13). In patients with imatinib-resistant disease or who are imatinib-intolerant, sunitinib has a significant clinical benefit with a PFS of 5.6 months (14,15). Regorafenib was studied for patients with progressive disease (PD) on imatinib and sunitinib, resulting in a PFS of 4.8 months (6,15). Other agents that have been investigated in phase II trials include sorafenib (16), pazopanib (17), cabozantinib (18), and dasatinib (19). Despite the current treatment options, there is still an unmet need for further therapies, as the majority of patients will ultimately be refractory to those treatments.

Ripretinib is a type II switch-control TKI that inhibits variety of KIT and PDGFRA mutations, including activating and drug-resistant mutations, as well as other kinases, such as PDGFRB, TIE2, VEGFR2, and BRAF (13). Ripretinib works by forcing the activation loop (or activation switch) into an inactive conformation, hence called switch-control (13). It was approved in 2020 for advanced GIST refractory to at least three TKIs with a standard dose of 150 mg daily (4).

The first-in-human phase I study of ripretinib determined the recommended phase II dose of 150 mg daily, that was associated with a favorable tolerability profile (4,15). In the trial, the maximum dose evaluated was 200 mg twice a day and no maximum tolerated dose was reached (15). Remarkably, ripretinib 150 mg twice daily was also studied and well-tolerated (4,15). Only three patients out of 258 experienced dose-limiting toxicity in the study: Two had an asymptomatic grade 3 lipase elevations, and one, an asymptomatic grade 4 creatine phosphokinase elevation (15). Neither of the patients described here experienced limiting side effects, including elevations in lipase or creatine phosphokinase.

The two cases we described progressed while receiving the standard dose of ripretinib but responded after dose escalation. In both trials (the INVICTUS trial and phase I trial), patients receiving ripretinib at 150 mg daily with PD were allowed to dose escalate to 150 mg twice a day (4,15). Sub-analysis of the phase I trial showed that 64 patients ultimately received ripretinib at 150 mg twice daily. They achieved a PFS of 8.3 months when ripretinib 150 mg twice a day was used as second or third line therapy, and 5.5 months when used as fourth line, with a similar safety profile compared to 150 mg daily (20). Like imatinib, where dose escalation is a valid strategy after PD in the standard dose (21), ripretinib dose-escalation also seems to be a suitable strategy. Our cases illustrate that patients that progress under standard dose ripretinib can not only achieve stable disease but also radiological responses with dose escalation. To minimize the possibility of an initial pseudo-progression, we analyzed the images utilizing Choi criteria that considers density changes (7).

Since the PFS of ripretinib exceeds those historically reported for second-line sunitinib therapy (5.6 months) and third-line regorafenib therapy (4.8 months), investigators are now conducting a phase III study (INTRIGUE; NCT03673501) in which ripretinib is being compared to sunitinib as second-line therapy. Future studies are needed to assess the optimal strategy of the dose escalation of ripretinib; after progression on the standard dose, as a ripretinib re-challenge after a different agent or even initially in a subset of patients harboring specific mutations or clinical characteristics.

Dose escalation of ripretinib is well-tolerated and leads to objective responses in patients whose tumors progressed after standard dose. Future studies are needed to establish when this strategy should be best used.

Reporting Checklist: The authors have completed the CARE reporting checklist. Available at http://dx.doi.org/10.21037/gist-21-1

Conflicts of Interest: All authors have completed the ICMJE uniform disclosure form (available at http://dx.doi.org/10.21037/gist-21-1). GD is a Deciphera’s advisor board consultant. JCT is consultant for Deciphera, Bayer, Daiichi, Epizyme, Blueprint and C4 Therapeutics. The other authors have no conflicts of interest to declare.