Gastrointestinal stromal tumors (GIST) are relatively rare tumors affecting approximately 5,000 newly diagnosed patients annually in the USA, but are the most common mesenchymal tumors of the gastrointestinal tract. GIST were called leiomyomas and leiomyosarcomas in the past, but recent studies have identified interstitial cells of Cajal as the cell of origin of GIST, distinguishing GIST from other mesenchymal GI tumors (1-3). c-KIT (CD117) is expressed in 80–100% and CD34 in 50–80% of GIST, respectively (1,4), and their expression is used to help diagnose GIST. DOG-1 and PKCθ are commonly expressed by GIST as well and are particularly useful in the identification of c-KIT-negative stromal tumors (5-9). Previous reports have identified c-KIT and PDGFRA mutations in the vast majority of GIST (1,2).

Although there are multiple studies that examine the histology, pathogenesis, and treatment of GIST, existing data regarding the epidemiology of GIST are limited. Few publications to date have addressed potential ethnic differences in the incidence or prevalence of GIST. A population-based study of 292 GIST patients and 292 age- and sex-matched controls from the U.S. National Cancer Institute’s Surveillance, Epidemiology and End Results (SEER) registry database, found no statistically significant differences in geographic region, location of residence, or median income, but found significantly more white controls than cases compared with blacks and other non-whites (10). Another retrospective SEER study examined 1,458 malignant GIST cases from 1992 to 2000 in 12 SEER registry regions and found the highest incidence rate in Hawaii (1.06/100,000 person-years compared to the national age-adjusted incidence rate of 0.68/100,000 person-years) (11). This led us to examine the factors associated with Hawaii having the highest incidence of GIST among SEER regions in the USA.

We present the following article in accordance with the MDAR reporting checklist (available at http://dx.doi.org/10.21037/gist-20-2).

The Hawaii SEER registry data were queried and all diagnoses of malignant gastrointestinal stromal sarcoma (ICD-O-3 code 8936) from 1998 to 2009 were identified. The Hawaii Tumor Registry (HTR) has been part of the U.S. SEER program since 1973.

Diagnosis of GIST was based on morphology (spindle, epithelioid, mixed) and immunohistochemical tumor markers (c-KIT, DOG1 or PDGFRA). Prior to 1998, the terms leiomyoma, leiomyosarcoma, neurofibromas, schwannomas were more commonly used to refer to GIST, however because of their location and lack of immunohistochemical staining, were largely indistinguishable from GIST. To avoid historical coding “bias”, sampling bias, or classification errors, tumors with these diagnoses (leiomyoma, leiomyosarcoma, neurofibroma, schwannoma) prior to 1998 were excluded from our data set. The HTR database includes patient demographics, tumor histology, primary site topography, tumor behavior, grade, and stage of disease at diagnosis, and immunohistochemistry in more recent cases.

The Residual Tissue Repositories of two SEER registries in Hawaii and Iowa were queried for de-identified malignant GIST tissue cases (ICD-O-3 code 8936) cases from 1998–2017. Formalin-fixed and paraffin-embedded (FFPE) GIST tissue sections (cases; n=63) were collected from the HTR and Queen’s Medical Center. An additional eight malignant GIST cases from 2000–2015 were provided by the State Health Registry of Iowa due to the smaller number of whites with GIST in Hawaii. All GIST surgical resection specimens contained tumor bordered by non-malignant gastrointestinal tissue.

The controls were chosen from diagnostic esophagogastroduodenoscopy cases performed at the Queen’s Medical Center from 2015–2017 found to have gastritis without evidence of tumors. Multiple (4-8) pinch biopsy specimens from the gastric corpus and antrum were obtained from 65 control patients who were referred for evaluation of upper gastrointestinal symptoms or anemia, and were found to have endoscopic and histopathologic evidence of gastritis without evidence of gastric malignancies or peptic ulcer disease.

(iceA1 and iceA2 are allelic variants of iceA. Detection of either allele was considered positive for iceA).

Human beta-globulin was used as a PCR control for the extraction of human DNA from the tissues:

PCR was performed on purified tumor DNA in 20 µL goTaq green PCR buffer (PROMEGA, USA) containing forward and reverse primers. PCR was performed using a GeneAmp PCR System 9700 (Applied Biosystems, USA) with the following conditions: 6 minutes of preincubation at 94 °C followed by 40 cycles of 30 seconds each at 94 °C, 30 seconds at 55 °C and 30 seconds at 72 °C. Final extension was performed for 7 minutes at 72 °C. The PCR products were resolved on 2% agarose gels, and, the respective bands were cut out of the agarose gels followed by DNA isolation and purification. Sequencing of the PCR products extracted from the gels was performed to verify the PCR products. The purified PCR products were sequenced using the same primers above and the resulting sequences matched using Nucleotide BLAST with matches yielding significance at P<0.05. Both negative and positive (patients with positive H. pylori infection by Giemsa stain of gastric biopsies) controls were utilized for all PCR assays. The uniformity of DNA quality was determined by detection of the housekeeping gene bgl by PCR. The PCR detection of the H. pylori-specific genes was performed in duplicate for each sample.

Approval for this research was granted by the Western Institutional Review Board (protocol no. 1168906) and University of Hawaii Human Subjects Committee (2014-302). This study conformed to the provisions of the Declaration of Helsinki (as revised in 2013). Due to the retrospective nature of the data and biospecimen collection, and de-identification of all personal health information, individual consent for this retrospective analysis was waived.

In addition to descriptive statistical analyses, bivariate analyses were performed to compare data; chi-square tests were used to determine the statistical significance between the frequency of GIST in various minority ethnic groups. Crude and unconditional logistic regression analyses were performed using SPSS v22 (IBM Corp., Armonk, NY, USA) to calculate risk [odds ratio (OR); 95% confidence interval (CI)] of detection of H. pylori genes in all 71 GIST cases (from Hawaii and Iowa) versus the 66 controls (from Hawaii). All 95% CI were two-sided. P<0.05 was considered statistically significant.

One hundred and forty-seven patients with a confirmed histologic diagnosis of malignant GIST were reported in the Hawaii SEER database from 1998–2009 (Table 1). Fifty-six percent of GIST were in the stomach, 34.0% in the small intestine, and 3.5% in the colon (Table 1). There was no significant difference in the prevalence of GIST between men or women of any ethnic group (Table 1). Fifty-four point four percent of GIST were staged as localized, 17.7% regional, 22.4% with distant metastases, and 5.4% unstaged at the time of diagnosis (Table 1). Ethnicity was reported for all individuals except for 0.7% (no ethnicity reported) of GIST subjects. Compared to whites, malignant GIST incident rates were significantly greater in Japanese (P=4.3×10–4), Chinese (P=4.7×10–5), Korean (P=1.5×10–7), Vietnamese (P=2.6×10–9), Pacific Islander (P=3.3×10–7), and Filipino (P=0.03) ethnic groups in Hawaii (Table 2). The gastric and Asian predominance of GIST in the multi-ethnic Hawaii population was reminiscent of a previous study that strongly linked H. pylori infection to gastric adenocarcinoma in Hawaii Asians (18). Multiple studies have found a high coincidence of GIST and non-GIST cancers (mostly adenocarcinomas) in the stomachs and gastroesophageal junctions of the same patients, suggesting common risk factors for the two types of tumors (19-23). These data led us to look for an association between H. pylori infection and GIST. 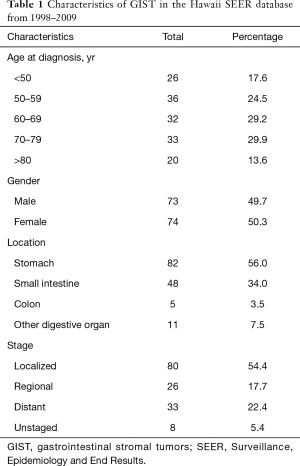 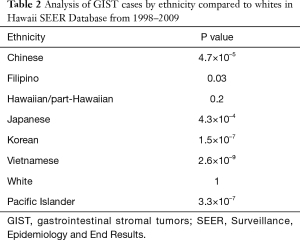 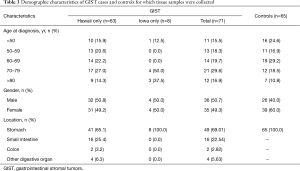 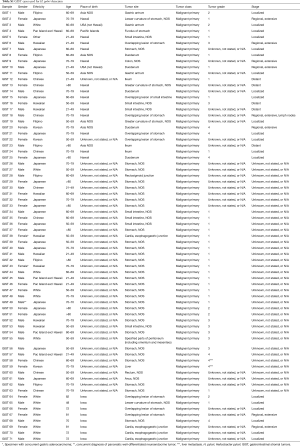 With regards to the controls, we selected patients referred for evaluation of upper gastrointestinal symptoms or anemia, who were found to have endoscopic and histopathologic evidence of gastritis without evidence of gastric malignancies or peptic ulcer disease after careful consideration. We did consider patients with known peptic ulcer disease as controls but previous studies have shown an inverse correlation between duodenal ulcers and gastric cancer, and a direct correlation between gastric ulcers and gastric cancer (31-34). Thus, including duodenal ulcer patients as controls would have potentially skewed the ORs for H. pylori infection in favor of GIST cases. Furthermore, using patients with gastric ulcers as controls would possibly have diminished the likelihood ratios for H. pylori infection and GIST, but may have included patients at risk for both gastric ulcers and GIST.

In our study, H. pylori genes were detected not just in gastric GIST but in small intestinal, colonic, and extra-intestinal GIST as well. This is not unexpected since H. pylori has been detected in the small and large intestines of patients with gastrointestinal diseases and even in the liver of patients with liver cancers (35-37). Nevertheless, the majority of primary GIST tumors in Hawaii occur in the stomach, where H. pylori infection is most prevalent. Gastric adenocarcinoma is much more frequent than gastric MALT lymphoma and GIST, likely due to the fact that the latter malignancies originate in the submucosal layers of the stomach which underlie the epithelium and therefore are more distant from H. pylori and carcinogens.

In the USA, there is no recommendation for gastric cancer screening in the general population due to the relatively low overall rate of gastric cancer. However, clinicians should be aware of the increased frequency of GIST, in addition to gastric adenocarcinoma and MALT lymphoma, in patients at increased risk for or with H. pylori infection. As GIST arise within the gastrointestinal submucosa, they first appear as raised lesions covered by normal appearing mucosa and frequently require endoscopic ultrasound with fine needle aspiration for further characterization (38). Future studies should determine if eradication of H. pylori infection decreases the rate of GIST.

Reporting Checklist: The authors have completed the MDAR reporting checklist. Available at http://dx.doi.org/10.21037/gist-20-2

Conflicts of Interest: All authors have completed the ICMJE uniform disclosure form (available at http://dx.doi.org/10.21037/gist-20-2). Dr. CFL reports grants from National Cancer Institute, during the conduct of the study. The other authors have no conflicts of interest to declare.

Ethical Statement: The authors are accountable for all aspects of the work in ensuring that questions related to the accuracy or integrity of any part of the work are appropriately investigated and resolved. Approval for this research was granted by the Western Institutional Review Board (protocol No. 1168906) and University of Hawaii Human Subjects Committee (2014-302). This study conformed to the provisions of the Declaration of Helsinki (as revised in 2013). Due to the retrospective nature of the data and biospecimen collection, and de-identification of all personal health information, individual consent for this retrospective analysis was waived.