Gastrointestinal stromal tumors (GISTs) are rare mesenchymal neoplasms of the gastrointestinal (GI) tract, accounting for 0.3% to 0.5% of all GI tumors (1), with an estimated frequency of 10–20/L million population (2,3), occurring at the sixth decade of life. GISTs, mainly ones larger than 4 cm have a wide range of presentations from abdominal discomfort and bloating to abdominal emergencies due to massive GI hemorrhage, with pressure necrosis and ulceration of the overlying mucosa is the main mechanism leading to GI hemorrhage.

A high index of suspicion is needed for its diagnosis, as GIST is a rare tumor (2,4,5). Currently, with the available radiologic options available, there’s no one technique that has a 100% certainty for diagnosis (2,3,6). On the other hand, computed tomography (CT) angiography has the ability to localize the bleeding, hence, the diagnosis can be made in a timely manner resulting in a more favorable outcome. Herein, we report a case of 46-year-old male patient presenting with massive GI bleed from jejunal GIST, leading to hemodynamic instability, requiring massive transfusion protocol managed by small bowel resection.

We present the following article in accordance with the CARE reporting checklist (available at http://dx.doi.org/10.21037/gist-20-3).

All procedures performed in studies involving human participants were in accordance with the ethical standards of the institutional and/or national research committee(s) and with the Helsinki Declaration (as revised in 2013). Written informed consent was obtained from the patient. This is a case of 46-year-old male patient previously healthy, status post splenectomy in 1992 for splenic rapture when engaged in motor vehicle accident presenting with hematochezia and was transferred from a peripheral hospital for the management of his GI bleed. He reports a 5-day history of recurrent episodes of melena up to 5 times per day associated with dizziness, palpitations and presyncope. He denied any associated symptoms of abdominal pain, nausea and vomiting. Patient denied any family history of GI disorders, upon presentation he showed signs of hypovolemia with a heart rate of 108 beats per minute and blood pressure of 85/50 mmHg. Gastric lavage done using a nasogastric tube was negative for blood and digital rectal exam was positive for fresh blood. Initial hemoglobin and hematocrit levels were 6.2 g/dL and 19.1% respectively with platelet count of 63,000/mm3. He first received 3 units of packed red blood cells and 3 units of fresh frozen plasma and was started on intravenous proton pump inhibitors. In the emergency department esophagogastroduodenoscopy (EGD) was done and was normal, whereas colonoscopy showed fresh blood throughout the colon, as well as in the terminal ileum but with inability to identify the site of bleeding. Computerized tomography angiography (CTA) performed and showed a 5.2 cm ×4.2 cm heterogeneously enhancing mass within the proximal aspect of the jejunum about 20 cm away from ligament of Treitz (Figure 1) most likely representing the source of bleed where contrast blush was seen and presence of persistent enhancement through the delayed phase suggestive of active bleed within the tumor. The patient’s condition became unstable after the CTA and required intubation. After which immediate intervention with diagnostic arteriography of the superior mesenteric artery showing severe diffuse spasm of mesenteric arterial system, and based on the findings of the CTA left jejunal branches were selected showing an area of eccentric hyperemia after contrast administration and metal coil embolization of the multiple feeding branches. Patient transferred to intensive care unit after embolization, and couple of hours later he had a cardiac arrest and was successfully resuscitated. Routine blood work-up the next day after receiving 10 units of packed red blood cells, 2 units of platelets and 10 units of fresh frozen plasma in less than 12 hours showed a hemoglobin level of 4.8 g/dL and platelets 105,000/mm3. Patient still hemodynamically stable, intubated and sedated so he was taken urgently to the operating theater for diagnostic laparoscopy through under vision trocar and two 5-mm trocars, running of the small bowels towards ligament of Treitz, identification of the tumor at the mid jejunum. Left paraumbilical incision about 7 cm, Alexis retractor inserted, bowel exteriorized, small bowel resection (Figure 2) about 20 cm from ligament of Treitz with primary side to side anastomosis done and closure of the mesenteric defect. Stable postoperative course, extubated 48 hours post-operatively. Transferred to surgical ward day 3 post-operatively, hemoglobin level was stable and did not require any blood transfusions after the surgical intervention. Pathology result showed cKit/CD117 positive gastrointestinal stromal tumor (GIST), mixed spindle cell and epithelioid cell types, moderate risk lesion with a size of 5.2 cm (mitotic rate <5/5 mm2). Surgical margins negative for tumor. Patient was discharged on day 7 post surgery in good overall medical condition (refer to timeline). Patient to be followed with oncologist as outpatient, where the patient was given tyrosine kinase inhibitors. Patient is disease free at 1-year follow-up. The limitation of this case is the use of minimally invasive surgery for massive GI bleeding, which can’t be utilized in all patients especially those that are hemodynamically unstable. 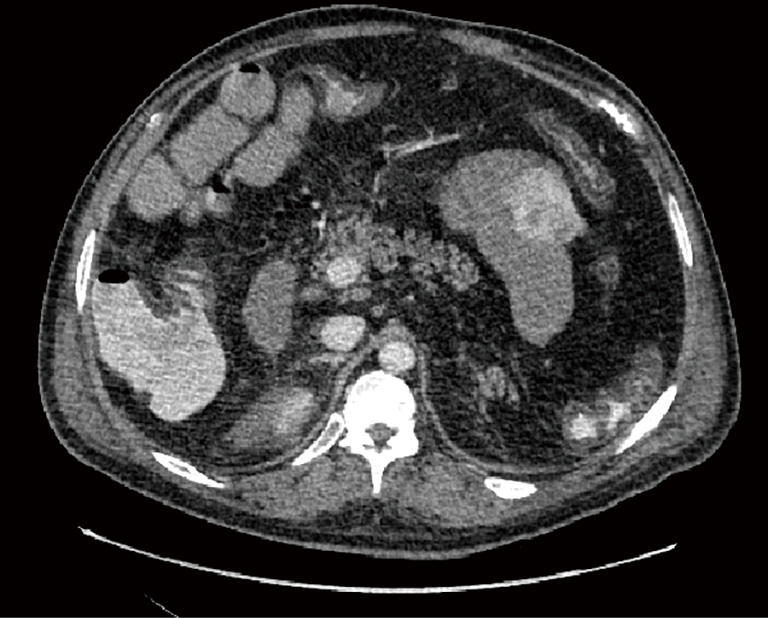 Figure 1 5.2 cm × 4.2 cm heterogeneously enhancing mass within the proximal aspect of the jejunum. 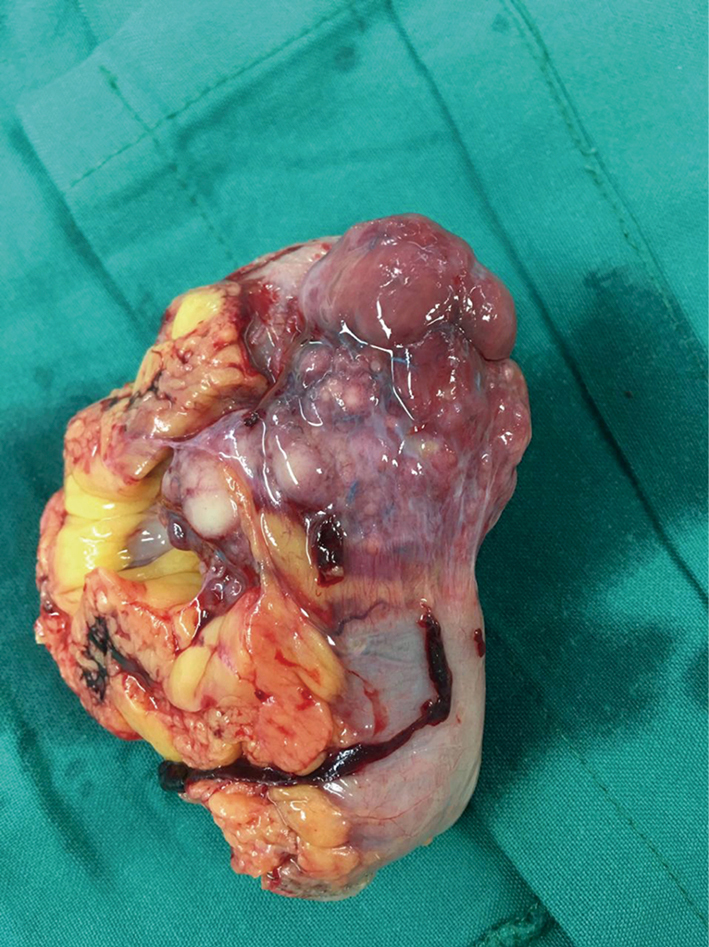 First described by Mazur and Clark in 1983 (7) GIST is considered the most common mesenchymal neoplasm of the GI tract. Although rare, GISTs, mainly ones larger than 4 cm have a wide range of presentations from abdominal discomfort and bloating to abdominal emergencies due to massive GI hemorrhage, with pressure necrosis and ulceration of the overlying mucosa is the main mechanism leading to GI hemorrhage. Among the wide differential diagnosis for GI bleeding, jejunal GIST is one of the rarest etiologies. Due to its location and hence the inability to identify by endoscopy it is difficult to diagnose. From here, CT angiography is considered essential for identification of the site of GI bleed, which aids in diagnosis of GIST. The mainstay treatment for this emergent presentation is resection, which if done in a timely manner results in a good clinical outcome. R0 resection with intact pseudo-capsule is the cornerstone for surgical management. Furthermore, excision of nearby adjacent organs so that to avoid rupture of the capsule and hence spillage into the abdominal cavity should be kept in mind. These tumors have no tendency to metastasize to lymph nodes, making lymphadenectomy no necessary (8). The role of mini invasive surgery such as laparoscopic approach in GIST resections continue to expand with the bases of traditional open surgery being utilized also in laparoscopic surgery. Our patient presented with massive GI bleeding from jejunal GIST, leading to hemodynamic instability, requiring massive transfusion protocol. Gastroscopy was normal and colonoscopy demonstrated presence of fresh blood without identification of the source of bleeding. The combination of these findings led to the suspicion of a small intestinal bleeding source. Hence, arteriography was done to accurately localize the bleeding source and has the potential to be a therapeutic modality by selective embolization.

We believe that this case report highlights the important role of CT in the diagnosis of small bowel massive bleeding. In addition, the efficacy of angiography to accurately locate the bleeding segment was shown. The abovementioned translates directly into better planning for surgery. Furthermore, this case highlights the importance of the minimally invasive approach in the treatment of bleeding jejunal GISTs. Diagnosis of bleeding jejunal GISTs is a challenge due to its inaccessibility by endoscopy. As in all reported cases in the medical literature surgical excision is the mainstay for treatment. Besides, surgical intervention in a timely manner is the key to successful outcome. On the other hand, the role of minimally invasive surgery, as manifested for the first time in medical literature, in management of bleeding GIST finds its way in selected patients. Furthermore, when compared to other sites of massive GI bleeding, jejunal GIST as a source of massive GI bleed is challenging to diagnose and treat as it is inaccessible by traditional endoscopy. Having said this, it is difficult to diagnose and treat and a high index of suspicion is needed to diagnose and consequently treat.

In rare instances GISTs present as massive GI bleeding necessitating admission to the hospital and urgent interference. In our case the early multidisciplinary approach manifested by involvement of interventional radiology with the surgical team was the cornerstone in the successful management of our patient and should be considered in all cases of massive upper GI bleeding.

Patient perspective: at 10-day follow-up patient was satisfied by the treatment he received.

Reporting Checklist: The authors have completed the CARE reporting checklist. Available at http://dx.doi.org/10.21037/gist-20-3

Conflicts of Interest: All authors have completed the ICMJE uniform disclosure form (available at http://dx.doi.org/10.21037/gist-20-3). The authors have no conflicts of interest to declare.